What is lower impact paintball?

Low impact paintball is the game we all know and love, played with smaller, less painful paintballs. 50 caliber paintballs as opposed to your more traditional 68 caliber ball. The joy of our sport is easy to witness, we see it every day in our customers as they excitedly grab hold of their first paintball gun and prepare to head out on the field. Unfortunately that joy is quickly replaced by the sting of a 68 caliber paintball, sometimes the fear of getting hurt keeps that player off the field completely.

50 Caliber paintball is the long awaited solution to loosing customers to welts and bruises. The 50 caliber paintball lets all players get involved and brings back the FUN of playing, without the fear of a bruise. 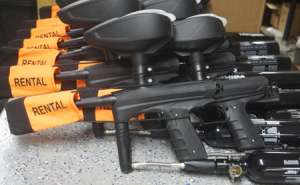 The 50 caliber paintball guns that we use are smaller and lighter than 68 caliber guns. The air tanks that power them are also much smaller and lighter. This makes them especially easy for younger players to carry. We have kids as young as 6 that can carry these with no problem.

THERE IS NO HUNTING LIKE THE HUNTING OF MAN, AND THOSE WHO HAVE HUNTED ARMED MEN LONG ENOUGH AND LIKED IT, NEVER CARE FOR ANYTHING ELSE THEREAFTER.
ERNEST HEMINGWAY